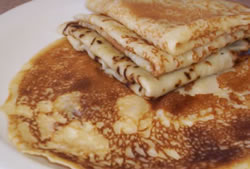 A little over a year ago, I was behind in my work and trying to catch up. Procrastinating, I wrote a short blurb about how going to medical school is like having to eat a stack of pancakes every morning. Some people thought it was funny. About 10 months later, a good friend of mine at Saint Louis University Medical School called me up to ask if he could use the concept for a 72-hour film competition. Of course, I said yes.

So he and his friends expanded it, added new portions, and really transformed it into something better than it was before. They pulled off the 7-minute feat in 72 hours, submitted it, and then on the night of the festival came home with FIRST PLACE!